The programme "Look Left Look Right: Historical Signage" has been suspended until further notice. You may set out on an online "Interactive Signage Journey” to discover stories behind our site-wide signages instead. You may also download our "DIY Postcard" to design your own signage at home.

Design Your Own Signage

Upon decommissioning in 2006, a collection of historical signages has been left intact in the Declared Monuments. Over the century the compound was in active service, numerous signages have been applied, replaced and eventually removed, all of these do not only reflect the ever- changing functions of buildings, but also represent the aesthetics, craftsmanship and lifestyle in different eras.

The programme traces the compound’s history by putting focus on a series of historical signages. Through displaying artefacts, visitors are encouraged to look at signages from perspectives including materials, language, font types and function. Former staff who have experiences in signage production, as well as experts in signage research and conservation, are engaged to interpret the topic. You could also freely explore the existing signages using the exhibition map available on site.

When we studied historical signages, we often look at historical photographs of the compound. In this exhibition we will show you different photographs so that you can look into their details as well. Below are four of these old photographs of Tai Kwun - are you able to point out the signage hidden in them? 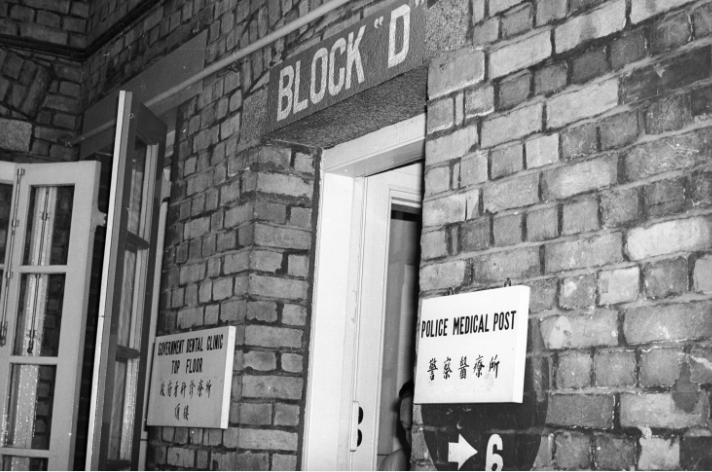 Strolling through the streets and lanes of the city, you can always find signages of every hue. Their design constantly evolves as time changes, adding unique layers to the streetscape of Hong Kong. While this exhibition focuses on signages within the compound, have you ever wondered how the signages beyond Tai Kwun become what they are today?

To drum up business in the past, shop owners would put their products at the storefront to grab passers-by’s attention. However, not all shops could adopt this strategy; some of them hung a fabric sign with graphics or text outside their stores instead, becoming the archetype of shop signs we see today.

Early shop signs were mostly vertical and timber signages. After World War II, as the economy began to boom, a larger variety of materials were employed in signage production, such as neon light and plastic light boxes. A myriad of signage designs therefore blossomed, creating a dazzling cityscape filled with dynamic shapes, bustling layout, and vibrant colours.

As technology advanced, old signages gradually fell into disuse. In the mid-1980s, the sign-making industry went through a period of digitalisation. With new technology, production time was shortened with quality improved. Traditional handwritten signages have therefore become obsolete. In the 21st century, LED lighting has been widely used for its price, durability, and energy-efficiency, and neon signages passed out of use. In 2010, Minor Works Control System was fully implemented by the government. Many signages that existed after WWII but were deemed to be an illegal installation had to be removed. As a result, neon signages are gradually disappearing from view and becoming part of our local heritage.

As a former British colony, many road signs in Hong Kong today have retained a British standard design.

As early as the 1940s, Hong Kong’s road signs adopted Maybury’s standard design from the United Kingdom. Sir Maybury was an expert in the management and upkeep of the road network, and in 1920, he proposed a new road sign system for the Ministry of Transport in the UK. However, this system was complicated and confusing as one message would often be broken into several elements. In addition, it was not very user-friendly since text, rather than graphics, was used as the major medium. The Public Works Department of Hong Kong had therefore proposed re-designing road signs in 1973, with reference to Worboys’ standard design.

Worboys’ standard was also derived from British design. As the then Chairman of Council of Industrial Design, Sir Worboys was appointed to chair the Traffic Signs Committee of the UK in 1961 to review the design of road signs. After multiple trials, the Committee proposed a new set of standard design, with one of its elements being the use of simple pictograms to make information simpler and more direct. T-shaped signage was one of the earliest street sign designs in Hong Kong, with capitalised letters in English on top and Chinese characters written from right to left at the bottom. In 1961, T-shaped signages were gradually replaced by rectangular signages, with English on top and Chinese at the bottom, with the latter aligned either left or right.

In 2005, the Highways Department initiated a replacement of streets signs. Most of the signs have been changed to how they look today. Apart from showing street names, there are also arrows and building numbers on both sides of the signs. Unlike the earlier design, the new street signs are  double-sided, so that pedestrians can also view the information from the pavement. Although most street signs have been replaced, we can still spot a few old-style street signs that have remained in the city today.